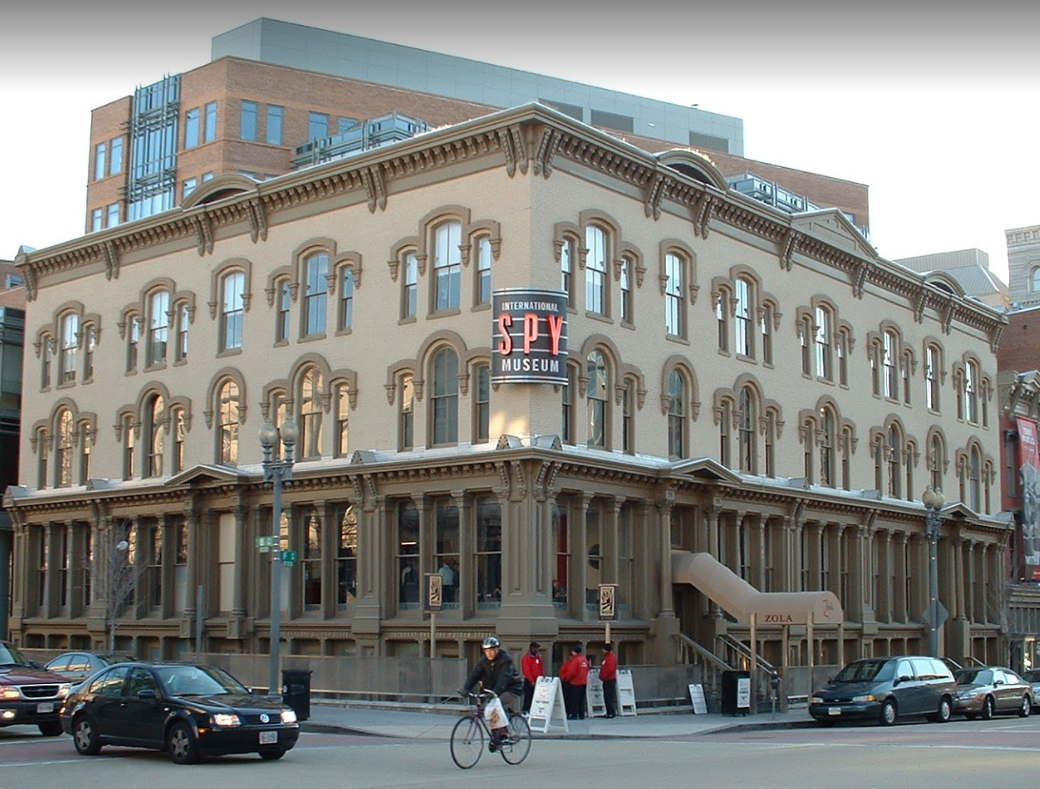 The International Spy Museum opened in Washington, DC on July 19, 2002. It is the only public museum in the United States solely dedicated to espionage and the only one in the world to provide a global perspective on an all-but-invisible profession that has shaped history and continues to have a significant impact on world events. The Museum features the largest collection of international espionage artifacts ever placed on public display. Many of these objects are being seen by the public for the first time. These artifacts illuminate the work of famous spies and pivotal espionage actions as well as help bring to life the strategies and techniques of the men and women behind some of the most secretive espionage missions in world history. The mission of the International Spy Museum is to educate the public about espionage in an engaging way and to provide a context that fosters understanding of its important role in and impact on current and historic events.

COVERS AND LEGENDS
Guests are confronted with a giant photomural of a guard manning his foreign checkpoint. Guests are challenged to adopt a cover identity, memorize specific details about it, and learn first-hand the importance of keeping your “cover.”

Artifacts and examples of identification-related documents typically used by spies are on display, while an audio/visual presentation details the importance of learning and keeping a cover. Consider the induction to the spy world complete.
SCHOOL FOR SPIES
Learn about microdots, invisible ink, buttonhole cameras, submarine recording systems, bugs of all kinds, and ingenious disguise techniques developed by Hollywood for the CIA. The School For Spies™ gallery has more than 50 years of spy technology developed by agencies from the OSS to the KGB, and still in use today.

Artifacts and examples of identification-related documents typically used by spies are on display, while an audio/visual presentation details the importance of learning and keeping a cover. Consider the induction to the spy world complete.

THE SECRET HISTORY OF HISTORY

Travel back through the centuries to the earliest moments of the second oldest profession. Uncover the stories of famous men and women who were doubly effective as spies, because nobody ever could have imagined them in that role. Meet agents Josephine Baker and Julia Child!

Track today’s satellite technology back to its first stirrings, when a pigeon became a decorated World War I veteran. Meet the Sisterhood of Spies, a select few of the many not-so-innocent women who were agents from the American Civil War into the 20th century. And follow the evolution of modern Russian spycraft from its Checkist beginnings under the “Father of the KGB,” Feliks Dzerzhinsky.

And we all know the history behind a bewildering variety of poisonous snakes that emerged as the Berlin Wall came down. Oh, you don’t? There’s a lot more secret history where that came from.

SPIES AMONG US Ingenious deceptions. Double-crossed agents. Code-breaking masterminds. It’s the stuff movies, and wars, are made of. Learn about the German and Russian spy rings operating under America’s nose before WWII. Explore the unheeded intelligence that warned of Pearl Harbor. Learn about Ultra, the top secret Allied code-breaking success that may have shortened the war by two years. And test your code-breaking skills while learning about how the Enigma worked and was eventually broken.

Then there are the celebrity spies, who traded on easy access and provided invaluable intelligence, such luminaries as chanteuse Josephine Baker, Oscar-winning director John Ford, and pro ballplayer Moe Berg. And meet the relatively unknown agents, who risked everything to work behind enemy lines, and who paid the ultimate price. Behold the biggest secret of the 20th Century, the atom bomb. How was the secret lost? You guessed it.

WAR OF THE SPIES
The war ended but an Iron Curtain descended. And with it came a modern conflict — the war of the spies. Step into divided Berlin to see world powers facing off with spies as foot soldiers, and their efforts to keep the Cold War from growing too hot.

Feel the pervasiveness of Stasi spying where neighbors spied on each other, children on parents, husbands on wives. Visit the Berlin tunnel that tapped Soviet communication lines. Follow the further advances in spy technology from spy planes to satellites. It was a time defined by some of the biggest spy stories of the Cold War, complicated stories, some still unfolding even today. Observe how spies from Kim Philby to Robert Hanssen led double lives in secret, how they were ultimately caught, and what devastating consequences resulted from the information they had passed on to the other side.

THE 21ST CENTURY The Berlin Wall came down, the Cold War ended, “the dragon” had been slain. A golden era of the espionage we all know had come to an end. It didn’t take long for the world to learn that the unknown is just as formidable. A bewildering variety of never-seen-before threats sit in the shadows. In the Ground Truth Theater, we confront the challenges that intelligence faces today, possibly more than ever.

We’re all connected to a world wide web of technology. But does that mean we’re all susceptible to a new type of terror? Cyber attacks are the new WMDs, and the electronic theft and destruction of intel is the modern spy game. Weapons Of Mass Disruption™ studies how cyber attacks can cripple a nation, what cyber forensics specialists can do to defend against it, and how the world can be disrupted with the push of a different kind of button.

FROM BALLROOM TO BATTLEFIELD: A SPY’S EYE VIEW OF THE CIVIL WAR

To commemorate the 150th anniversary of the start of the Civil War, the International Spy Museum is highlighting the significant role espionage played during the War that divided a Nation. The new exhibit “From Ballroom to Battlefield: A Spy’s Eye View of the Civil War” vividly illustrates how intelligence helped to shape the greatest of American struggles. New spy gadgetry, documents and rich storytelling illustrate the impact of intelligence successes and failures during the war. Untold tales such as why Confederate General Lee was “blind” at Gettysburg and how a marching band helped the Confederates fool a Union General will be featured. The exhibit also takes guests on “the Great Locomotive Chase” led by Union spy James J. Andrews and reveals how high-society female spies worked for both the Union and Confederacy. These stories and more vividly illustrate the role of spies and spycraft throughout the war. Visit The Spy Museum

President Woodrow Wilson bought the home on Embassy Row in the last months of his second term as President of the United States as a gift to his wife, Edith Bolling Wilson.  He presented her the deed in December 1920, although he had never seen the house.  The former president and his wife moved into the home on Inauguration Day, which in 1921 was March 4 (not the current date of January 20). Wilson made several modifications to the house, including: a billiard room, “stacks” for his library of over 8,000 books, and a one-story brick garage.

The Woodrow Wilson House is a national historic landmark and house museum that focuses on President Woodrow Wilson’s “Washington Years (1912-1924)”. The museum promotes a greater awareness of Wilson’s public life and ideals for future generations through guided tours, exhibitions and educational programs. The museum also serves as a community preservation model and resource, dedicated to the stewardship and presentation of an authentic collection and property.

As you may know, the acquisition and preservation of Woodrow Wilson House is part of the great movement of historic preservationthat recognizes that our historic sites are irreplaceable national treasures. Noted historian David McCullough tells us that historic places connect with the American people unlike anything else, making history accessible and credible. In fact, most Americans think that museums and historic sites are the most trustworthy sources for exploring the past.  Read Full Article