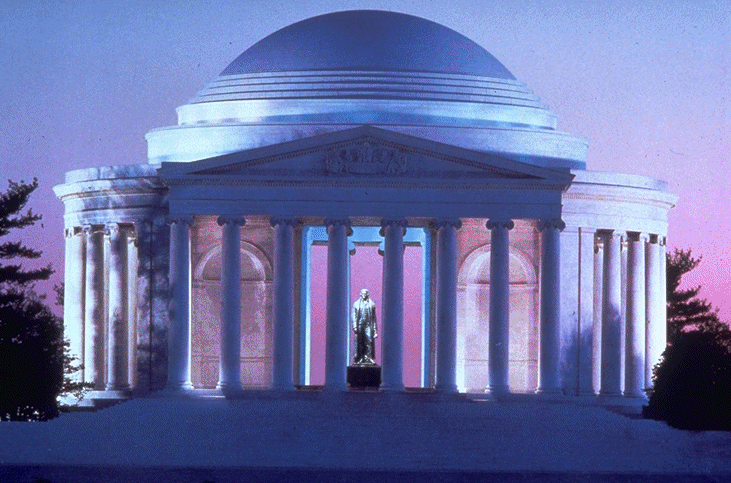 Thomas Jefferson Memorial is a presidential memorial in Washington, D.C. that is dedicated to Thomas Jefferson, an American Founding Father and the third President of the United States. The neoclassical building was designed by John Russell Pope. It was built by Philadelphia contractor John McShain. Construction began in 1939, the building was completed in 1943, and the bronze statue of Jefferson was added in 1947.

The Jefferson Memorial is managed by the National Park Service under its National Mall and Memorial Parks division. In 2007, it was ranked fourth on the List of America’s Favorite Architecture by the American Institute of Architects.

The current site of the Memorial was originally created using landfill dredged from the Potomac River in the late 19th century. It became a popular bathing beach for Washingtonians and other locals.

It became apparent that the site was well suited for another high-profile memorial since it sat directly south of the White House. By 1901 the Senate Park Commission, better known as the McMillan Commission, had proposed placing a pantheon-like structure on the site hosting “the statues of the illustrious men of the nation, or whether the memory of some individual shall be honored by a monument of the first rank may be left to the future”; no action was ever taken by Congress on this issue.  Read more…

Thomas Jefferson Memorial is part of the National Mall and Memorial Parks.  The site lies at the southern end of the National Mall, adjacent to the Tidal Basin in West Potomac Park. The memorial rests within the sightline to and from the White House, which stands one mile to the north.  Directions