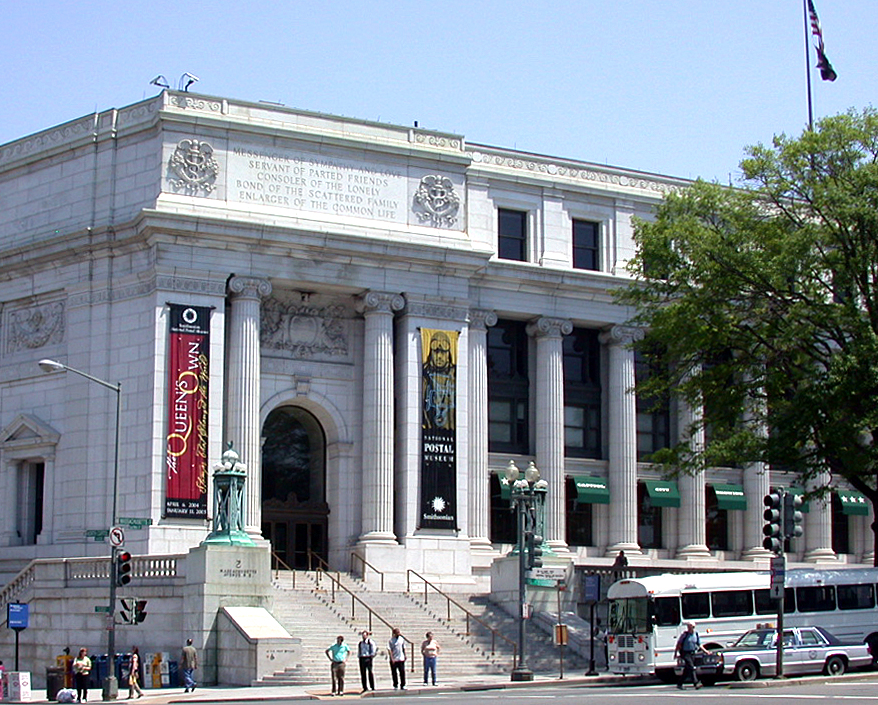 The Smithsonian National Postal Museum is located on the lower level of the historic City Post Office Building, which was constructed in 1914 and served as the Washington, D.C., post office from 1914 through 1986. The Museum occupies 75,000 square feet of the building with 23,000 square feet devoted to exhibition space. The Museum also houses a 6,000-square-foot research library, a stamp store and a museum shop.

The Smithsonian’s National Postal Museum is dedicated to the preservation, study and presentation of postal history and philately. The museum uses exhibits, educational public programs and research to make this rich history available to scholars, philatelists, collectors and visitors from around the world.

Visitors enter the Museum through the lobby of the building and proceed to escalators that transport them down to the floor level of the Museum’s 90-foot-high atrium. The atrium, which features three suspended airmail planes, is one of five exhibit galleries that tells the story of postal history in America.

The National Philatelic Collection was established at the Smithsonian in 1886 with the donation of a sheet of 10-cent Confederate postage stamps. Generous gifts from individuals and foreign governments, transfers from government agencies and occasional purchases have increased the collection to today’s total of more than 5.9 million items.

In addition to one of the world’s largest collections of stamps and philatelic materials, the National Postal Museum has postal history material that pre-dates stamps, vehicles used to transport the mail, mailboxes and mailbags, postal uniforms and equipment.

The Museum’s galleries and inaugural exhibitions were designed by Miles Fridberg Molinaroli, Inc. with Bowie Gridley Architects. Support for exhibit fabrication was provided by the Smithsonian’s Office of Exhibits Central, the National Museum of American History’s Department of Exhibits and the National Air and Space Museum.

The National Postal Museum opened on July 30, 1993. It was created on November 6, 1990 in a joint agreement between the Smithsonian Institution and the United States Postal Service.