Founded in 1984, the National Law Enforcement Officers Memorial Fund is dedicated to honoring and remembering the service and sacrifice of law enforcement officers killed in the line of duty in the United States. 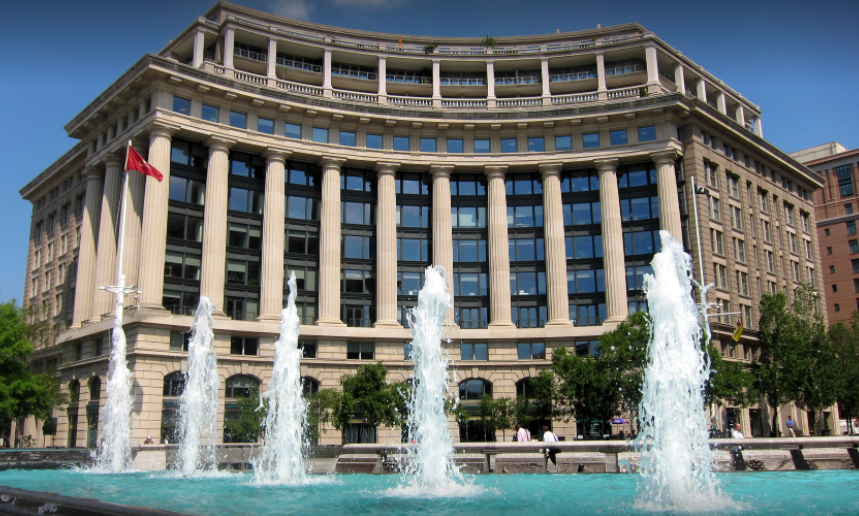 The Navy Memorial includes both a commemorative public plaza and a Naval Heritage Center. The plaza is a round ceremonial amphitheater paved in granite to form a 100-foot diameter of the world. Surrounding the deck of the plaza are fountains, pools, flagpole masts, and sculptural panels depicting historic achievements of the sea services. A symbolic statue of a Lone Sailor stands watch near the edge of the plaza.

Admiral Thompson observes that “to passersby, the appearance of the Memorial is not unlike that of America’s perceptions of the sea. Even though it is vast and broad and unmistakably there, you could miss it if you are not paying attention. But when you walk on to the site, it engulfs you with its scale and grandeur.”

Perhaps the most striking individual feature of the Navy Memorial is the statue of The Lone Sailor©. The work of sculptor Stanley Bleifeld, The Lone Sailor© represents all people who ever served, are serving now, or who are yet to serve in the Navy and other sea services.

In one of the two classical buildings that flank the Navy Memorial is located the Naval Heritage Center. Another work of sculpture by Stanley Bleifeld – The Homecoming© statue depicting the joyous reunion of a sailor, wife, and child – greets visitors as they enter. It is here that the ongoing work of the United States Navy Memorial takes place, and it is here that the personal links between the people who have served our nation at sea are being forged and strengthened every day, the links that unite our sea service veterans and active-duty personnel around the world.

History of the U.S. Navy Memorial for America’s sea services, the United States Navy Memorial is the triumph of a centuries-old dream. In the early days of America’s national independence, architect Pierre L’Enfant envisioned a memorial in the Nation’s Capital to “to celebrate the first rise of the Navy and consecrate its progress and achievements.” But it was only in the twentieth century that L’Enfant’s vision of a Navy Memorial in Washington, D.C., was realized.

Pennsylvania Avenue, “America’s Main Street,” the boulevard that links the U.S. Capitol and White House, the scene of so many parades, pageants, and national memories, was chosen to be the location.

After President John F. Kennedy – himself a Navy war hero – inspired the redevelopment of Pennsylvania Avenue, another Navy war hero, Admiral Arleigh Burke, proclaimed in 1977 that “we have talked long enough about a Navy Memorial and it’s time we did something about it.” Burke and several Navy colleagues got busy: They founded a non-profit organization, the United States Navy Memorial.

In 1980, under the Presidency of Rear Admiral William Thompson, USN (Ret.), the United States Navy Memorial sought and received the blessing of Congress to construct a Navy Memorial on public land in the District of Columbia. Working with the Pennsylvania Avenue Development Corporation, the Foundation selected Market Square, across the street from the National Archives, as the Navy Memorial’s site.

Excerpted from the book From The Sea.